The Secret About “Public Secrets”

I was looking for a good e-literature work that I haven’t done a blog about before, so I went onto the e-lit (ELO) collection volume 2 and chose a random work. I thought “ooh, this one is about secrets, so it should be interesting!” Turns out, it really was. Public Secrets is an E-lit work created by Sharon Daniel and Erik Loyer. It looks like a bunch of invisible boxes with a lot of different quotes that appear in them. Apparently, according to the words on top of the boxes, it is supposed to represent a prison (at least for the inside/outside tab). These quotes are prisoner’s secrets that were allowed to be made public. Most are sad/depressing quotes about how they know they messed up their lives, while others are more informative about how we wouldn’t have as many people in prison if we changed our outlook about many aspects. The quotes are only parts, pieces of the whole secret, which makes it all the more intriguing to click on each quote that appears and to listen to each individual tell their secret (although I think the audio recording is of one person). Also, I found interesting was that on the left side of the screen, there are some tabs. The first one I saw was the “inside/outside” tab, which I took to mean like the inside of the prison and the outside of the prison. Another tab that I clicked on said “bare-life/human-life” and the topic sentence on the top of the boxes says “Bare-life is preserved as an expression of sovereign power” which is an interesting quote and it makes me think of bare-life compared with being freed from prison and having freedom again. 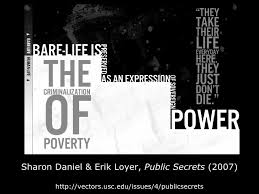 The last tab (other than the main menu tab) said “The Public Secret Utopia” and the quote that is spread along the top of these boxes says ” The trick to the public secret is knowing what not to know”. Sounds very philosophical, but each of these tabs fascinated me. I say that because each one you clicked on, took you to what I imagined was a separate place either inside or outside the prison walls. Each tab would have a new whole set of quotes of people’s secrets for you to click on and listen to. I guess I just liked this E-lit work a lot because I like knowing info, even secrets and to me, reading others biographies and secrets are fun. I won’t lie, I like to know a lot about individuals even if I don’t know them, but I know I’m not alone here! 🙂 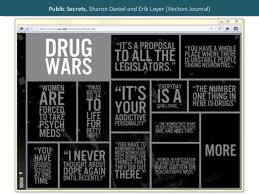 Oh, and another cool thing about this work is that you can click on the “read the transcript” above each quote and read along with the audio voice that is telling the public secret (I didn’t figure that out til like last minute!). I feel like it is more documentary-style like, which may be a good or bad thing, but I’ll leave that up to you all to decide that factor!

← Slicing Through the Page: Poetry and Collaboration in “Cut to the Flesh”
“Cannibal Dreams”: Science Made Poetry →