Everybody wants to rule the world, or in this case, they want their disease to completely wipe out the human race. Do you remember the movie Contagion? Pandemic 2 is very similar, except there’s no Matt Damon. (and no one survives.) The premise of the game is to create a disease so lethal that medicine has no way of defending against it and that it causes a global pandemic, killing all that come in contact with it. As the disease spreads, society as a whole collapses and self destructs. There are riots, hospitals burn and chaos ensues. The goal is to design your disease so intelligently that governments and leaders of the world don’t notice the epidemic occurring until it’s too late.

When the game first starts you’re given the option to name your disease and choose whether you want it to be a virus, bacteria, or parasite. After selecting your strain, you’re prompted to evolve your disease. You can choose from a variety of symptoms that you want affected peoples to exhibit and what do you want your disease to be resistant to. You can even customize the way in which you want to be spread in terms of environmental factors. Each choice comes with both pros and cons. For example, if you choose to have coughing as one of the symptoms that helps to spread your disease, it is effective but is very noticeable and can raise public awareness to those who are infected. 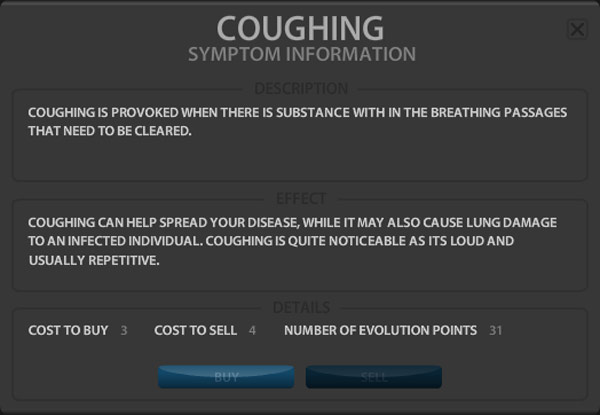 There is also a breaking news toolbar, which continually updates gamers on the current happenings of the world. It tells you about natural disasters, how the disease is doing in some countries and where it is spreading.

I think that this game is important because of the way that it applies realistic avenues to a game and incorporates the gravity of a situation such as this occurring. It explores the way in which art imitates life, and causes one to access the implications of the way respond in times of global pandemic.