Ganesha is the next heavyweight champ, watch your back Mayweather.

I’ve deciding that accidentally killing Jesus wasn’t enough, and to ensure my one-way ticket straight to hell, I have a responsibility to continue in my blasphemous ways. This week, I started another game by the lovely developers at molleindustria. Their game, Faith Fighter was designed with the goal to try to end religious bias and prejudice by allowing you to “choose your belief and kick the shit out of your enemies. Give vent to your intolerance! Religious hate has never been so much fun.” They have this statement featured under the actual gameplay screen and they even offer a disclaimer that announces that their intentions aren’t to offend any religions but to push gamers into reflecting over how religious and sacred representations are often used to justify conflicts between nations and people.

The game itself is set up in a mock fighter game screen, one almost similar to that of popular console fighter games like, Street Fighter or Tekken.  Each featured character or avatar is designed to represent and resemble the major religious leaders taken from many of the most prevalent world religions. You can play as God, Jesus, Ganesha, Budda, Budai and the Prophet Muhammad. 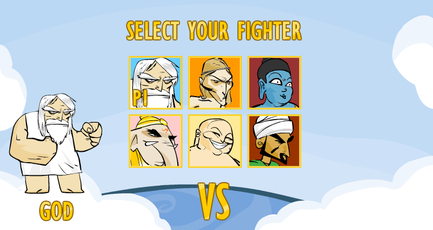 The game is available to play in two versions, the first is the uncensored version in which there is a depiction of the Prophet Muhammad, which has lead to much of the controversy that surrounds the game itself. There is also a censored version that blurs out the Prophet’s face, in an attempt to avoid offending people that believe he should not be visually depicted at all. Once the game starts you are solicited to choose an avatar (Ganesha looks so cute but like he could easily bench press 480 without even sweating), and then at random you’re pitted against another religious figure. Each of the characters possess special super powers or “kill moves” that are reflective to some of the miracles and powers that they possessed in their own sacred texts. Ganesha wields an axe, God can summon fire and Xenu can fly and shoot his ray guns. The final character that you have to fight is represented as being unknown, but once you have defeated all other religions the boss character is Xenu, yeah that’s right Scientology all up in this game. (Ganesha kicked his ass, so much for those gamma ray guns). In response to the backlash that they faced over what many deemed to be religiously insensitive and offensive, molleindustria released a statement and a sequel called Faith Fighter 2 that invites you to spread your love to all religions. It’s pretty fun and even features the Flying Spaghetti Monster, but it isn’t nearly as fun as beating Jesus up while playing God.

Overall this game was very interesting and caused me to do some more research on each of the featured religions. I understand the idea of using visual representations of religious and sacred figures to show that people can often try to manipulate religious texts and images to fuel their own personal agendas that can often affect humanity as a whole in its goal to achieve peaceful coexistence between the major world religions.