The Work of an Interactive Fictionist

I was looking for something new, something different to create my next blog on and I went to the I <3 E-poetry site like I always do but instead of clicking on children’s literature, I chose to look through I <3 E-poetry games.  I was scrolling through and decided to pick one of Donna Leishman’s interactive fiction works. It is an interactive fiction game called “RedRidingHood”. It was definitely something new to me, even though we went over similar concepts like this game in my E-literature class.

RedRidingHood consists of the same background as the story Red Riding Hood, where she takes the basket to her grandmother’s house to find out the wolf had eaten her grandma. This game was more hip though. I played through it twice because it gave you two choices once you got to the field of X flowers, the first time I just woke her right up and she went straight to her grandma’s house but the ending was different, it was conspicous, like you know the wolf ate the grandma, but in the story, the wolf eats the little girl as well. Here, though it looked as if the little girl eats the wolf (although not shown, which is why I said conspicous) and then the little girl falls asleep on her grandma’s bed at the end and some strange man comes up with a gun pointed to her head. It was odd but it really fascinated me. 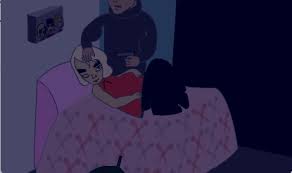 Then, I went back and started the game over but the second time I chose the other option when I got to the field of X flowers, which was to let Red dream. That Red must be a crazy dreamer because I first went to a building with the light on and then I was in a bedroom with a bunch of heads that when you clicked on them, their eyes started flashing yellow, and a bed that had eyeballs and skull faces on it and the bedspread was red, of course. In the far left corner of the room, however, was a journal, it looked like and I clicked on it just because it said “Do Not Enter”. When I clicked on it, it took me to what I thought was a club because my character I played as, Red, her clothes changed when we got to the doors. There was a sign above the doors that said Meat locker and I opened the door to find a women with very odd shoes, they looked like bear traps on her feet, and a man beside her leaning in towards her and on his shirt said “du has me”. From there it was like a frozen screen and I didn’t know what to click on and then I started hearing a loud alarm clock sound beeping and the screen went blank and I knew that was one of the endings as well. It was a cool experience to play through even though there were some pretty weird things..

Playing this game, reminded me of how the game Passage is constructed, because you are continuing on a path to the right the entire time, like in RedRidingHood as well, and then you eventually die of old age, but in this game, it is insinuated that she will get shot. The concept and construction of both of these interactive fiction games are primarily alike, with exceptions to the background story of each, but how they are made are basically the same format, which is fascinating to me to learn.  I think what I liked most about this game was how it was made into a more dark-like story of little red riding hood. It seems more of like a goth or punk genre of a game, but it was cool that Leishman came up with the idea to expand the imagination of what Red could actually look like and act like. It was an awesome experience to play the game.

← No Extra Lives – Permanent Character Death in Fire Emblem: Awakening
Dyscourse: The Paths You Forge Are Your Own →