Did I just kill Jesus? 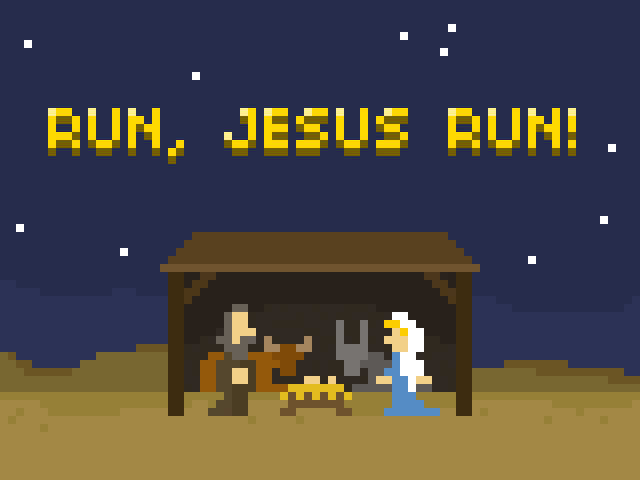 “Is this blasphemous?” was the first thought that crossed my mind when I began to play Run, Jesus, Run! This quirky piece of playable literature was created by the same people who brought us everyday the same dream, molleindustria. Similar to other games on the website, Run, Jesus, Run! allows its players to control an avatar (y’all you seriously get to play as Jesus) and complete specific objectives that are referred to as “Jesus things”. The game is subtitled as, “the 10 second gospel” which perfectly sums up the overall plot of the game. You are allowed 10 seconds to get through a variety of flash screens that all depict different scenes taken from the bible, each scene being one of the miracles that Jesus performed. With each task that you complete correctly, one of Jesus’s twelve disciples, the apostles, are shown at one of the last play-through scenes in a pixelated reenactment of Leonardo Da Vinci’s The Last Supper. The more tasks (miracles) that you perform sufficiently, the more apostles are seated at the table with Jesus. The game ends with a closing screen that depicts Jesus dying on the cross.

The game itself though very detailed in design and thought is actually very easy to play and complete. Once you get a grip on the controls and what the goal of the game actually is, it takes up hardly no time at all to get through each playable screen. In the beginning as someone who is admittedly very bad at playing computer games, I couldn’t figure what I needed to do during the “Jesus walks on water” screen and I ended up killing Jesus about four times. Overall, I believe that this game was really interesting and fun to play.

The fact that the creators were able to make such an interesting spin or perspective regarding the gospel of Jesus was such a fun and interactive way to view this part of the Bible, that is often regarded as having very serious undertones. This piece of interactive fiction truly explores the way that electronic literature can enhance one’s understanding or even knowledge about topics that are seen heavily in American society as well as in international popular culture. Run, Jesus, Run! skillfully captures all of the elements of interactive fiction that makes it different from traditional literature by capturing one of the most commonly referenced Urtexts and transforming it into an enjoyable video game.

3 comments for “Did I just kill Jesus?”