The Company of Myself

&nbsp;While stereotypes and generalized statements about genre are oftentimes stifling, reductive, and lead to a boring over-saturation of the same conceptual application, there is one thing they do that I believe is damn fantastic- they set us up with a tower of jaded expectations that becomes oh so exciting a subversive work brings them toppling down.  The Company of Myself is a flash game created by Kongregate member 2DArray, featuring  art by Luka Marcetic and music by David Carney, that topples the expectation that the platforming genre must sacrifice a rich, literary narrative for mechanical richness.  Instead, it offers a clever and nuanced hybrid of the two.

From the self-deprecating exerpt on the loading screen to the long, scrolling, purely narrative introductory bar of text spoken by our main character, the lonely hermit, The Company of Myself is unabashedly textual from the very beginning.  This introduction opens with a direct plea from the hermit to oblige him with your ear, to listen to his tale.  He tells you that he is alone, but assures you that he is content with this life.  He tells you of his two passions: performance, which he fancies an ironic desire to display himself for those he can’t relate to, and Kathryn, a love of his that he refuses to divulge much about.  Self-deprecating and tired in voice, the hermit admits that his story is not terribly interesting and offers to tell it through a “more interesting allegory” instead.  This is where the intro cuts out, and the game begins.

In truth, one might not even expect a platformer until the first level appears in the form of those iconic, blocky green and brown platforms, blue sky back backdrop, and ever-present life-counter that signify the genre so well.  Even the text on the first screen, as seen in the featured image of this article, offers a tutorial-esque messages that encourages the player to press the right arrow-key to continue the game.  This text is not just a tutorial though, it’s a passage from the mind of the hermit that not only showcases his motivation, his desire to reach this green block, but his understanding of the mechanical realm through which he is performing.  After all, he is, as we learn in his introduction, a performer.  We push him forward not only out of a completionist desire to finish the game, but to enact the hermit’s confirmed desire to perform and touch the green square- in this moment a mutually beneficial agreement, based on coinciding interests, is formed between the player and the hermit.  From here the connections begin to form, and the tower of our preconceptions begins to rumble and waver.  Yes, Mario had a goal, but he never told us how he felt about platforming.  He never told us that he felt satisfaction when he hit the top of the flag, asserted his understanding of the relationship he shared with audience.  The hermit knows who he is, where he is, what he’s doing, who we are, and he tells us about these things in exchange for our interest, which we express to him by taking the wheel and progressing his story.

As the telltale tutorial-laced platformer learning curve continues in the same format of expressed desires and interpretations on the part of the hermit, we begin to understand and critique his claims of loneliness through understanding of the mechanic in which the level may be restarted at any time, after which the exacts movements made before the restart will be re-enacted by a shadowy version of the hermit who he can newly interact with.  He talks of loneliness, of how he has nobody on whom he can rely but himself, yet, through the necessary implementation of this past self mechanic in order to progress, we see him surrounded by figures who are actively trying to help him to reach his goals.  This juxtaposition begs us to try and figure out what these past selves could represent- if he is truly alone and depends on no one else, does that mean the shadowy figures could simply represent the memories of past failures on which he learns and betters himself?  If so, how are we to take the fact that almost every single puzzle before and after certain points in the game are impossible to solve without standing on the shoulders of these other selves- they feel too real, too impactful and material to simply be memories. We feel for the man with whom we’ve made this mutual agreement, see through his somber resignation to his lonely fate.  We want to remind him that he has us too, but we must still ask the question of whether or not our actions have any kind of weight considering this is a story that is retroactively being told to us.  He knows that we are here to listen and engage now, but loneliness of his past becomes harder and harder to argue. 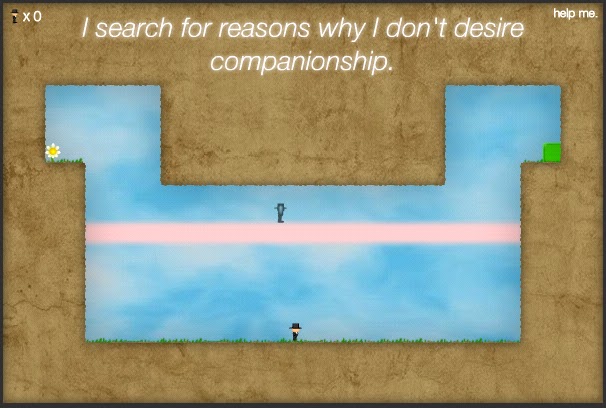 The textual narrative that unfolds from level to level challenge the player to read the mechanics and level design not just a medium for challenge, but as a performative representation of the tale we are reading.

This rings especially true when, in a fit of nostalgia for a better time, the hermit takes us even further back in his history- to a point in which he wasn’t lonely.  This is where we finally learn about Kathryn.  In his memories, we play as both the hermit and Kathryn as we learn how joyous the hermit was to combine his two passions- his love of performance and his partner.  For the first time, we see a sense of joy and radiant energy in the narrating hermit’s textual voice as he remembers his performances with her, yet a pang deep within us remembers that this joy will ultimately transform into the dismal and lonely reality we had just played.  There are no shadows or past selves in these flashbacks, just the narrator and Kathryn, but we feel their presence in the future we have played.  Alas, the happy memory comes to a tragic end, wherein the design of a puzzle forces Kathryn to presumably plummet to her demise as she holds down a switch on an unstable platform.  This is a choice the player must make to progress the game, and it is only with a sinking feeling in our gut that we follow through with the plan- faintly hoping that this allegorical representation of his memory does not equate falling to permanent death.  Alas, Kathryn is killed, and we return to a more somber, contemporary hermit and his shadows. We play both as our protagonist and Kathryn, his old companion, as he reflects on a time past in which he wasn’t alone.

Out of necessity, we had cast multitudes of shadows into pits up until this point in the game, but as we move forward it is expected of us to an even greater degree, and we feel it.  As we listen to the hermit narrate each passing level in a crescendo of intensifying resignation, abstraction and despair, we begin to imagine that we understand him even better- we consider whether he might have accepted his loneliness as a means of accepting responsibility for Kathryn’s death.  We consider the degree to which the allegory of the hermit’s life parallels the game- is there a less abstract conceptualization of the story that was reduced to the allegorical form of a game to convey the weight of the hermit’s struggles and losses?

I discuss the player character as a we, but I realize I only speak for my perspective, my experience.  I mean the we to signify this collective sense of the player, to evoke the narrative and emotional connections that the text brought to life for me in order to convey and emphasize the ways through which The Company of Myself entices the player to engage with platforming as they might not have before.  The sensations I felt were not new to me, but nostalgic for a time in which I would read the ambiguities and movements of the characters in my video games as a part of some greater, unspoken narrative as I was imagining it.  While implied stories in platformers are not unheard of, this is the first platformer I’ve played that truly felt literary in a significant, transformative sense that played off of the unique attributes of the genre.  It’s foolish to underestimate just how many ways there are to tell a good story.

← Reaction to The Djinni Chronicles
What I’m Wearing: A Look at Society’s Obsession with Women’s Clothing →