A Brief Moment of Literature Within LIMBO

Minor spoilers for those who want to experience the game in the dark for their first time:

LIMBO is a dark and foreboding game, where you play as a small boy trying to save his sister. You run from the woods through an industrial nightmare, and get chased and killed by almost everything you see. There are traps set in place to kill you, or just incidental hazards to trap the unwary adventurer. The game has already been compared to art multiple times, from its deconstruction of the traditional “rescue the princess” narrative to the perfectly crafted environments that never sacrifice gameplay for scenery.

LIMBO is not heavy on dialogue or writing, so while combing through articles I was surprised to come across one that paid any attention to the writing in the game. In one of the most iconic, but brief, scenes of LIMBO, you cross a giant, neon HOTEL sign.

Something I, and I assume a lot of people didn’t really pay attention to is the subtle way in which the game presents this scene. This is one of the only times you encounter any language in the game, so why did the developers choose for you to come across it instead of continuing to leave the game in an eerie sort of lingual silence? According to Flores, this scene forms what is known as concrete poetry: the typography of the words affects its meaning.

At this point in the game, you are well aware that everything is out to kill you. You’ve died dozens of times by now, and LIMBO never tries to pretend that it is going to let up. Yet, the HOTEL sign has multiple clues within its text that you are not safe near it. As you scroll across, it slowly reveals the word HOT, coupled by crackling electricity. As you climb across it, the sign fully reveals itself and breaks underneath you. The O swings and knocks over the T, allowing you to turn off the sign and presumably cross safely. However, just as the letter “l” in the word “hotel” trails off, so too does the L in the sign as it slowly shudders and rocks clockwise. It’s an interesting case of using the sound to reflect an in-game consequence.

The word itself isn’t without meaning, either, as it is meant to invoke a sense of safety. After traveling inhospitable woods and being attacked by a myriad of creatures, any sort of invitation to a home is more than welcome. After you shut off the electricity, and the aggressive sounds of electricity make way for wind and ambiance, the HOTEL sign becomes even safer for players. It represents a sense of security; since you tamed its puzzle, you are free to tread familiar ground. The sign becomes a solid, lifeless word in a game where an active usually spell danger for your character. However, as the static scenery betrays you and tries to throw you off of it one more time, you are shown that there is no safety or home within LIMBO. 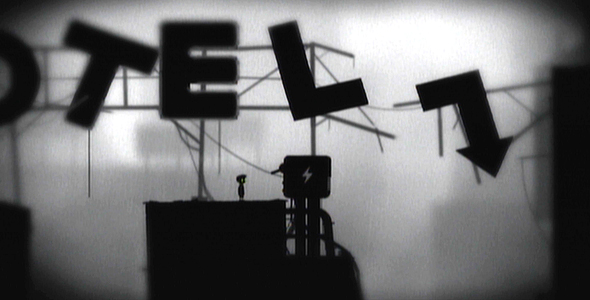 The significance of this to our understanding of electronic literature is how subtly it can creep up on you. LIMBO is already so thick with atmosphere it is practically palpable, so it comes as no surprise that the developers were able to inject such a short, visual poem into the experience. Electronic literature is able to do this quite often; it can seamlessly be integrated into anything.

4 comments for “A Brief Moment of Literature Within LIMBO”