In the novelty and creative potential for electronic literature as a relatively new media form, it didn’t appear to me that there was much elit content out there that adapted pre-existing literary works apart from the appropriation of direct text itself.  In class we have explored a great deal of interactive poetry that appropriated and combined the works of famous poets and George Lucas alike, but I wanted to see if there were any adaptations of novels that adapted the story, in it’s ambiguous entirely, in the form of an interactive game or other such elit form.  Needless to say I was swamped with many examples once I started looking, but none grabbed my attention more than the text adventure adaptation of the Hitchhiker’s Guide to the Galaxy, authored by Douglas Adams himself. 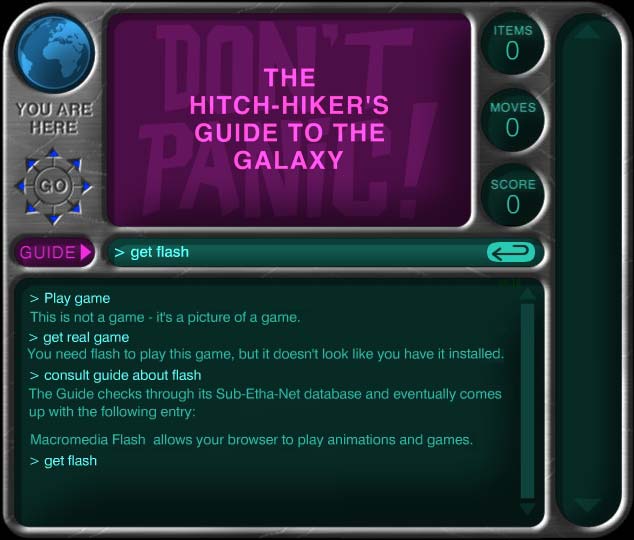 The new, upgraded UI for the most recent 30th anniversary edition of the game. Makes things much easier in certain senses, but no less difficult in others. Also very pleasant to look at.

The Hitchhiker Adventure Game was released by Infocom in 1984 for for the Apple II, Macintosh, Commodore 64, DOS, Amiga, Atari 8-bit and Atari ST, with Douglas Adams in charge of the text itself and Infocom’s Steve Meretzky in charge of the coding and other such technical bits.  The format of the game is in standard text adventure form, as you take on the role of Arthur Dent as he wakes up in his room to embark on an abridged version of his journey in the novel- towels, tea, and improbability drives all included of course.   Much to my surprise at not having stumbled across this sooner (especially given my love of Douglas Adams’ work), the game was received incredibly well as a cult hit from it’s launch in ’84 to the various remastering and anniversary editions that would come out in the 30 years to follow, the 30th anniversary edition that I played having nifty integrated visuals to make the experience more accessible.  Still, some would argue that it is still not accessible enough, though Douglas Adams himself would not be one of those people.

This image gives a small indication of the seeming irrelevance of many of the items you can pick up throughout the game, and the consequence of being without a clue for too long.

On that note, much of this initial buzz surrounding the game actually had to do with the game’s difficulty, which is precisely why it is worth reading within the context of electronic literature at large (apart from the delightful writing itself).  The difficulty, as I can attest, comes from the extremely specific array of commands the player must give Arthur, and with the pressure of time-sensitive events that will pass if they take too long no less.  The player gets a sense of this from their first few commands, as they learn through no direction apart from their own ability to read the context, politely inform them that they will be controlling each tiny gesture arthur must make, such as getting out of bed, putting on a gown before accessing the pockets, and even waiting before the next time-sensitive event will occur.  What’s more dangerous is how the game tempts you to take certain actions, through descriptions and requests from other players and the narrator itself, which will invariably lead to either a “game over” state in which progress can not be made or missing highly enjoyable scenes.  You will also not be able to earn as many points, if you care about that sort of thing.  There puzzles, namely the infamous Babel Fish puzzle that occurs as soon as entry to the Vogon ship, that are so hard and come so early on that many of the original players complained about being unable to progress much further than the beginning- even some known professionals in the computer games industry.   While some of the initial outcry touted it as poor game design,

It is in the sense that these scenes are ones you would lament missing if you had read the book that the madness of it’s difficulty finds purpose.   This is game in which you not only play as Arthur Dent, but play as the same Arthur Dent from the books who progressed through the topsy-turvy, endearingly presposterous plot of the novel.  In a very similar way to novel, which amused its readers by completely undermining their expectations and offering ridiculous, nonsensical problems with even more nonsensical solutions in a setting that is even wackier, so must the player learn to control the flow of this madness and play along with this Universe.  The trick is, one can only really get a sense of this by either reading the book or playing the game over, and over, and over, and over again.  Douglas Adams made this game with fans of his work entirely in mind, thereby demonstrating a unique and clever kind of response to his own work.  Not only did this demonstrate a mastery of his book’s own content, consistently reproducing the sense of wackiness while keeping almost complete consistency with the particular ridiculousnesses of the book, but it offered those who enjoyed the book to step in and learn to take command of this absolutely zany flow.   A bit of a major spoiler ahead, but the player is given no incdication, apart from the absence of tea in their inventory, that the ultimate action, culminating through many small decisions that are made throughout most of the plot, that propels the plot forward is making a decent cup of tea.  Not without knowing that the quest for a decent cup of tea was entirely prevalent in the original novel.  Having loved the series, and loved it all the more for having played this game, I can’t help but marvel at how flexible the medium of interactive fiction can be, how well it can do entirely different things to reflexively embody the unique traits of a text it is adapting.

← Stepping Back to See the Details
Response to Nightingale’s Playground →

3 comments for “The Hitchhiker Adventure Game”