The Walking Dead video game is an entirely 3D graphic adventure game based on universe of the eponymous graphic novel and developed by Telltale Games, a studio formed from Lucas Arts runaways in a similar fashion as Tim Schafer’s Double Fine Productions.  The game was co-directed by the author of the graphic novel, Robert Kirkman, who enthusiastically jumped on-board Telltales’ proposed offshoot of his work for the same reason I am writing about it right now: they wanted to bring his stories, his world, and his characters to light in new and innovative means through the interactive possibilities of game media.   While the linearity of traditional storytelling from his graphic novel was arguably kept in tact through a main, anchored plotline that remains the same regardless of a player’s decisions, the weight of split-second decision-making and integrated, real-time actions on the raw and humanistic elements of the story really throw the definition of a linear story into question in big ways.   Does a story with an anchored, unified, general story remain linear if a vast majority of it’s characterization and worldbuilding fall deeply within a reader/player’s realm of control?  Is a general plotline that can end with any of it’s characters possessing entirely different seniments, presence, and histories still the same story each time it is played?  It is through evoking questions like these that the storytelling innovations of Walking Dead challenges our conceptualization of the linear, and ultimately incentivises us to reconsider how we should discuss interactive storytelling- especially within the more rigid conceptualization of storytelling in videogames.

As the questions I posited might suggest, the Walking Dead places the player in ~direct control of one particular character, Lee, as they watch his his life at the burgeoning of Kirkman’s new, post-outbreak world and direct him by making key decisions for him, oftentimes in the form of direct control over his actions.  Many, if not most of the decisions are dialogue-based in a true-to-graphic-adventure format, and superficially this likens the Walking Dead to other conventional graphic adventure games which can be likened to branching hypertext stories with fancy 3D modeling and other such illustrative luxuries.  However, these familiar elements are brought to largely heightened levels of urgency in which there is a very limited window of time in which the player can decide and enact a particular dialogue option for Lee.  It’s a very, very simple mechanic- mechanically more restrictive than it is additive- but it introduces a mechanic in which anytime a player fails to respond in kind, Lee remains quiet/similarly indecisive, and the characters around him will respond as such.  Silence and indecisiveness become a frightening and looming omnipresent option that, depending on the ease with which a player can confront an issue, can be very difficult to avoid.  And, due to very nuanced and even-handed storytelling on the part of Kirkman and Telltale, the answers to these questions are seldom easy for someone trying to rationalize a “best” answer.  The different interconnecting points through which the narritive web of the Walking Dead is woven diverge not on moral blacks and whites, but on a plethora of different grays that, even given a player’s resolve to portray Lee as a particular type of person, do not always have an obvious impact on the world. 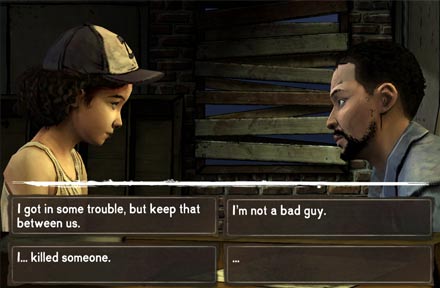 An image showcasing a decision making prompt from the game. Note the white bar on the top, which depletes as your time to make the decision runs out.

It is in this sense that the Walking Dead becomes intimate with a nuance of our own agency that seems to be so easily forgotten in the realm of interactive storytelling- that we do not have ultimate control of our fate through our words or actions.  Lee may be prompted by the player to save onecharacter over another, but in the end his decision isn’t the only factor determining whether or not the character lives or dies.  Oftentimes, the person you gunned to save will still die instead of the person you ignored, and Lee will be left with the reality that the person he ignored knows he didn’t prioritize their lives as highly.  This creates an incredibly interesting dynamic in which the player must weigh the certainty with which they can influence other character’s perception of Lee against the certainty with which Lee’s actions will actually see fruition.  To top it all off, characters will catch on quite quickly if you are simply choosing the decisions that you believe will please them.  These interactive narrative elements emulate the real decision-making dilemmas that an aspiring leader in a high-pressure situation, and through careful storytelling evoke these same feelings in the player.  Critical and player review  almost unanimously vouches for the ease of emotional investment this provides, and given the grim setting of this narrative and humanness of the characters this can lead to some major heartache and adrenaline rushes.

This screen from the game gives a glimpse at just how different each person’s playthrough might be from someone else’s.

The unspoiled player learns very quickly that their decisions have weight- characters will die in favor of other characters based on your decisions, oftentimes regardless of whether or not they intended for it or not.  That being said, it is argued that this immersion can be easily broken through knowledge of which characters are scripted not to die.  Armed with this knowledge, the aspirations of the game to emulate reality fall short of universal human mortality.  These same critics oftentimes continue their argument to cite this game’s linearity as its fault- a game with a linear story-line that relies on the mortality and presence of certain characters in certain scenes to orchestrate a particular narrative progression.  While this criticism might seem superfluous given the same criticism can be applied to books and other such traditional linear media which can be easily cheated through prior knowledge of their plot-points and remain no less respected as storytelling forms, there exists a different set of expectations for the extra dimensions of possibility for interactive storytelling.  Theoretically an interactive story may branch indefinitely provided the author(s) are willing to produce said branches, so any plot point that can not branch is likewise based in the author’s decision and not in the limitations of the media form.  This is line of thought is arguably absurd in relation to the sheer investment of creativity and resources required to make any story with a reasonably digestible narrative volume, let alone a high-budget game, but it does effectively expose the notion that, when immersing ourselves in interactive fiction, we will always be met with frustration when we reach the end of our exploratory ropes.  Is this a limitation of linear narrative fiction exclusively, though?  Of course not.  Even in ambitious open-world games with an main plot-line that is optional for all intents in purposes such as the latest Grand Theft Auto installment, parameters exist.  A player will still easily find limitations in the game’s coding just as they might if they tried to break immersion the Walking Dead by looking for the things that they can’t do.  In neither case is the game world the Matrix nor is the playable character an awakened Neo.  Each interactive story explores different facets of reality- GTA is more enamored with simulating the largeness, complexity, and openness of our world, whereas the Walking Dead attempts to capture a simulation of human thought and experience through a weighted sense of time, agency, and emotionality.

In these terms, the conceptual differences between linearity and non-linearity come across reductive in reference to the Walking Dead.  It’s this schizophrenic snag between linearity and free, heavily weighted decision making that arguably demonstrates the sheer depth of possible storytelling methods within interactive fiction and just how interesting the results can be when reigning conceptual paradigms such as linear and nonlinear are broken down and cast aside.

36 comments for “Telltale Games’ The Walking Dead: Agency on Rails”