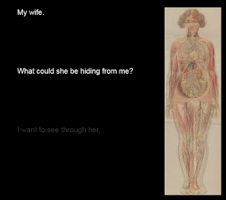 “Opacity” by Serge Bouchardon is a piece of electronic literature that primarily utilizes a poetic form.  It is divided into four parts.  All four parts deal with the theme of opaqueness and transparency.  Likewise, interaction is required during all four parts in order to advance the poem.

The first section opens up with the narrator waking up. The narrator sees the world as opaque, and he strives for transparency.  To him, transparency is the equivalent to having a clear understanding of himself. Accommodating the poetry is black image. As the reader moves the mouse over the image, its pixels become clearer and brighter.  The mouse has to roll over the pixels several times for the image to become completely clear and coherent.  The image reveals itself to be the inside of a computer. The music is appropriately technological sounding with beeps, and as more of the image becomes clear, the music intensifies and becomes louder.  During my first interaction with the poem, I simply saw the image as an aesthetic. However, on my second attempt at reading it, I interpreted it as mirroring the poem. The narrator strives for transparency.  In a certain way, I think it represents the gradual build of self awareness and transparency the narrator strives for.

During the second section, the narrator continues to ask for transparency. However, instead of self transparency, he strives for transparency of others. More specifically, he is suspicious of his wife. The corresponding interactive image is of a naked woman. As the reader moves the mouse over her, we see inside of her. From her skin, it transitions to her muscles, then her circulatory system, and finally her skeleton and nervous system.  This section once again reinforces the theme of transparency as knowledge.

The third section is the wordiest. It doesn’t have any corresponding images. However, it still requires some interaction from the reader. Each line is presented one by one, and in order to go on to the next one, the reader must move the mouse over the words. As you do, the music intensifies until it hits a forte, pushing the line to the background while the next one comes up to the center of the screen.  The words themselves reflect a feeling of nothingness and striving to be completed with a spouse.  In doing so, the narrator asks for less opaqueness, revealing an openness towards the relationship.

The final section reveals a sudden shift in tone. With the image of a woman in a steamy shower, the reader clicks and drags lines over the shower glass, revealing moments of transparency before the steam quickly recollects on the glass, making it opaque. The narrator suddenly craves opacity.  In a sudden circulatory motion, the narrator starts out where he started: craving what he does not have. In a way, it represents how the grass is always greener.  The poem’s final line, “Where am I?” puts the narrator in a similar position to the beginning of the poem. He is lost and unable to see.

Upon a second reading of the poem, I got a bit of a different vibe from the piece. It reminded me of the character Alex Forrest from Fatal Attraction. There was an obsessive quality to the narrator’s tone and desire’s. The narrator may suffer from a mental disorder, which reveals the motive for clarity in life.  Similarly, there is an obsessive suspicion of a loved one, which brings to mind a lack of trust. The third section especially brings out an obsessive stalker, as portrayed through the narrator’s lack of knowledge of the person they are observing.  The final section shows a sort of bipolarity in that the narrator now seeks just the opposite of what he originally craved.

A second reading also made me realize that the sections themselves may be considered stanzas. There is a flow to them which allows them to be connected through the themes of opaqueness and transparency.  All in all, I found it interesting how I was able to read the piece differently by reading it over.  For one, I believe this points towards the piece’s universality and flexibility to apply to multiple situations. But it also makes me wonder just what the author’s intent was.

← The Sounds of a Short Satirical Presidency
Clearance: An Exercise in Paranoia →