As someone who is a fanatic of Jazz music and is absolutely fascinated by the Beat Generation, Dak0ta was a no-brainer instant love for me. (The fact that i may have done a 20 minute research presentation on the Beats may have helped but, well, you know… .)

Now thinking in terms of the originality of the text of Dak0ta there is nothing particularly new about it. It is a story of friends packing up a car with drugs, alcohol, and their free spirits ready to hit the road. They take in the landscape and geography, they get drunk and angry and fall down, they talk about Jazz music and swinging-soul, and make references to stars like Elvis Presley and Marilyn Monroe. Reading a story about how a group of friends on a road trip which at one point describes them eating food is not a major step forward in artful progress.

The manner this story is told, consumed, and experienced digitally and sensually makes all the difference in the world.

Young Hae-Chang has made the old and used been-there-done-that and brought Beat style to the digital age.

Dak0ta very much so hearkens to Jack Kerouac’s On the Road. Dakota accomplishes this by utilizing some prominent storytelling techniques and traits of Beat works.

Right off the bat we have a loud “FUCKING” thrown right in our face which truly does set a mood and mindset for the story. These Korean travelers are most likely young, defiant, and freewheelin’ no-holds-barred thrill-seekers going on a bender trip seeking fun in life and life in fun.

This sort of language is very reminiscent of how the Beats used their literature to break down specific barriers of society in the 1940s and 1950s. Allen Ginsberg’s Howl and William S. Burrough’s Naked Lunch both saw obscenity trials which were eventually overcome (albeit the “freedom” of speech may have taken several years for the works to be fully expressed to the public). These 2 works encapsulated the Beat movement–especially Howl–and wanted to break down conventionally and traditionally held beliefs. Especially back in the Beat heyday, the word “fuck,” unlike today, was a very heavy hitting word that, as George Carlin put it, “was the word you saved for the end of the argument.”

Now “fuck” is used i think a total of 3 or 4 times in Dak0ta. The word is not overused but is used just enough to instill that Beat vibe, that feel of attacking the language and its barriers in proper public discourse. Another truly nasty word of the original Dirty Seven rears its head as well, and that is the term “cunt.” Even today, that word is not flung around very much and in a lot of ways has taken the place of the word “fuck” in the sense that “fuck” does not hold much weight–well, relatively speaking of today compared to decades ago. But Hae-Chang is channeling that Beat spirit in his explicit language.

Not only in the language, but with his details. Take the moment when it is described how one of the travelers has been drinking and is now vomiting. Drunk and cursing his boss, his wife, and those around him making accusations of infidelity and then discussing sexual experiences of genital stimulation (“BUT IT WAS A G00D HANDJ0B, TH0UGH!”). The original Beats were known for bucking the status quo for just about every facet of then-American life, but explicit descriptions of sexual experiences and directly challenging the reserved nature of proper upstanding Americans was a hit for them. Sexual libertinism for themselves and the rest of the country, whether it be heterosexual, homosexual, or just several partners simultaneously. Sex and drugs and drink are all here in full force.

If you ever want to be blown away by a new-age bible scroll, have a look at Kerouac’s On the Road scroll at the Boott Cotton Mills Museum located in Lowell, Masschussetts.

Jack Kerouac did not write his fiction solely out of his imagination, most of the stories are comprised of real life experiences with names changed (what is stranger than life?!). What Kerouac would do while traveling across America was write all his experiences down as they happened in journals. He would write constantly and in the moment attempting to retain every passing moment as they happened. He then went on a 3 week typing process of the entire transcript into this one gigantic scroll. Taking a cue from Neal  Cassady and a long-winded rant of a letter, Kerouac typed up the novel in letter form to capture the Jazz nature he fought so hard to bring to written word. Kerouac called it “Spontaneous Prose.”

To capture the realism of life and life in the moment is no easy feat. Hae-Chang is recreating that style with Dak0ta talking of each event as they happen coupled with internal thoughts as they come and go with the current circumstances of the story. It would not be surprising to hear that Hae-Chang and some friends drove around much in the manner of Jack Kerouac and Neal Cassady and just…had experiences across (what i am assuming is) Korea while keeping some sort of journal of the main events of their happenings as they occurred. Hae-Chang does it with strong relentlessness to recreate that prose feel.

Hae-Chang also incorporates music and does so in a way that Jack Kerouac could only have possibly imagined; and with that, comes the next major concept:

It is no secret that the Beats were infatuated with Jazz music and its players.
The improvisational expression of music and of the player in a moment of time; the swinging grooves that people could genuinely feel and dance and “get down” to; the challenge of racial standards in America and the direction music was going; even the way the musicians dressed had an influence (black turtlenecks and pants all thanks to Dizzy Gillespie [and where do you think the Beats of then and the hipsters of today got their thick-rimmed black glass? Thanks, Dizzy!]); and not to mention the drug use of all these cats playing the music…the Beats loved it, the Beats really dug it, man, and Kerouac was no exception.

Kerouac had one player in mind who really turned heads and pushed Jazz in the intellectual contemporary direction into what it is today: an intellectual and expressive art. There were 3 key players of Jazz in the mid-to-late 1940s and 1950s that really had Jazz moving: Miles Davis, Thelonious Monk, and the ever-important Charlie Parker. 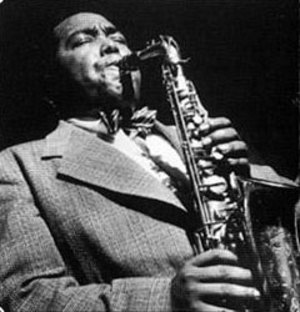 Parker approached Jazz with a new face to Jazz. His explosive improvisational power caught the ear of many; he revolutionized the Bebop sound; his speed and power were unmatched for the day; he took rhythm, harmonies, and melodies to a new level; he spawned a large set of standards still championed today; and Kerouac would be damned if he couldn’t translate that musical ability to written word.

Another key importance of Charlie Parker was his drug use. Parker was a heroin addict, in fact it inevitably led to his declining health and vagrancy, selling his instruments to get a quick fix. Everybody, EVERYBODY, had to play just like Bird and thus they had to shoot up just like Bird. To become, emulation is the first move. And as such, drug experimentation was strong with the Beats.

Now what Hae-Chang has done with music and Beat literature is something that would most definitely make Kerouac’s eyes pop. Absolutely does Hae-Chang reference Jazz musician greats such as Art Blakey, Ray Bryant, and Donald Bird, but his incorporation of music into this digital storytelling is an impeccable transposition and translation of musical power and written word working together as a combo (that’s a Jazz joke right there).

The music playing for Dak0ta is…well, it’s most certainly not straight-ahead Jazz, but its explosive power aids the work incredibly with its tribal sound (an aural environment which helps the whole defiant and young primitive nature these kids are exuding). Each word and statement has been synced up with the music and reinforces that ever-present mindset of the currently happening events going on. The music is loud, in your face, and a veritable bombardment,
and if this ain’t tyin’ in to everything i’ve brought up ’til now…well, if i’m lyin’ i’m dyin’.

And Young Hae-Chang translates everything the Beats did and made so popular and caustically defiant into something truly special in our digital age. A neo-Beat work in our computer and technologically driven age.

i’ve said it before and i’ll say it again: Young Hae-Chang and his Dak0ta would make Jack Kerouac proud.