For those of you that are unsure of what exactly an internet meme is, I’ll try and explain as well as provide you with a TED (Technology, Entertainment, Design) talk by Susan Blackmore on memes (and temes) which, I feel, is worth checking out regardless.

Memes can actually be defined in two ways. Originally, a meme referred to any thing that can be passed on from one person to another by any means other than through genetics. This means, as Blackmore mentions in her video (below), that almost anything can be considered a meme, e.g. the wearing of the watch (because after all it wasn’t your idea) through imitation, or really any follow in fashion.

Along the same lines, the second definition, referring to the memes of the internet, are videos, images, etc., that are passed electronically from one person to another with varying, if any, modifications, though staying true to its source.

The notion of the internet meme has gotten so popular, in fact, that a database, is available for your browsing pleasure.

Though many internet memes are created almost solely for humor, every so often there comes one that has actual significance, and the most recent of those (to my knowledge) is what I want to share/discuss.

That meme is “Casually Pepper Spray Everything Cop.”

The footage above, from Nov. 18th, 2011, shows students at UC Davis in California, protesting in support of various and for their own “occupy” movements, getting pepper sprayed by a police officer. The event spread around the internet like a wildfire, causing a fairly large uproar.

It wasn’t until this picture (below) was posted on reddit that “Casually Pepper Spray Everything Cop,” turned into meme gold. 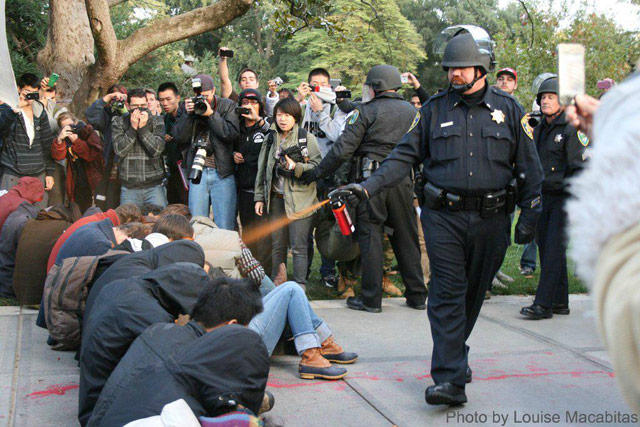 To create the meme, the officer was copied from the picture with photoshop and then placed into varying other photos, where he was, as the name of the meme suggests, “casually pepper spraying everything.”

Here are some variations… 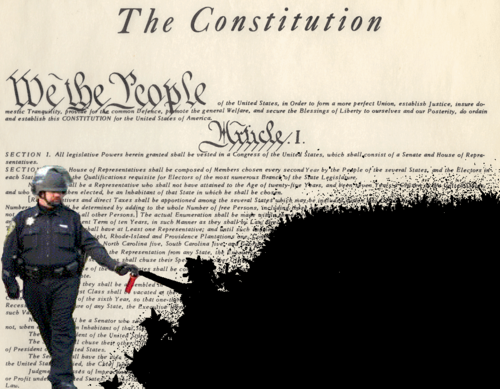 So why are these significant? They make a statement; a very political one.

Whether I agree with what they are saying isn’t relevant, but through their content their message/s, in my opinion is clear. By relating the officer to American history, by having him pepper spraying of the Declaration of Independence and the Constitution, the creators of these variations are quite bluntly saying that, through these and due to these events, American rights are/have been compromised.

By placing him in in Georges Seurat’s A Sunday Afternoon on the Island of La Grande Jatte, essentially vandalizing the photo for no reason, brings into questioning the reason for the pepper spraying at all.

After the pictures various other offshoots of the meme sprung forth, including a twitter and various videos/songs.

The big picture here is that new media provides us with not only a source of entertainment, but with further means to make statement, express opinion, and through new media, offer significance at intellectual levels.

Memes are worth reading into.