If you aren’t familiar with internet memes, you may want to consider moving out from under that rock you’ve become so fond of.

An internet meme is defined by the TechEncylopedia as “an image, video, story or joke that is voluntarily passed from one Internet user to another via e-mail, blogs and social networking sites. Considered a form of art, Internet memes are created to promote individuals, groups, movies, art, music and products, as well as to perpetrate a hoax or just be funny. They can disappear in days or last for years.”

Memes are similar to fads in that seemingly out of nowhere they explode onto the seen and often just as quickly they fade. Certain memes, particularly videos, despite their capacity to reach an extremely large audience, tend to be ushered out quickly as new viral videos explode onto the scene. From “Don’t Tase Me Bro,” to the “Bed Intruder Song,” and Rebecca Black’s instant-classic “Friday.” Once all the rage, now just old news. Well maybe not the last one.

What videos lack is an element of interaction. Thetrainjumper’s entry demonstrates a meme that originated as a video, but only persisted as a still shot that can be more easily manipulated and photo-shopped as a man leisurely pepper-spraying anything close by. Another great example of this would be Antoine Dodson from the “Bed Intruder Song” as seen here: 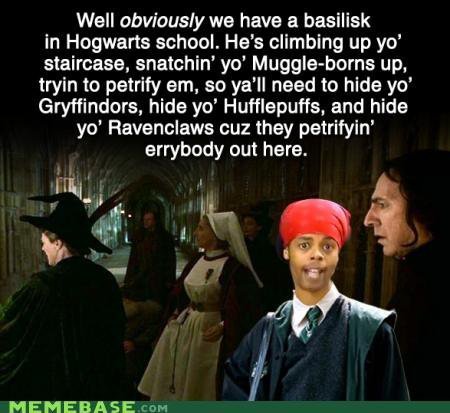 What’s most interesting are your standard image macros with text above and below the image, usually following a particular theme as indicated by the meme’s name. For example the Socially Awkward Penguin, or Aristocat, or one of my favorites: Foul Bachelor Frog. These memes are almost a form of Flash Fiction, that is a fiction characterized by extreme brevity. Here is a notable work of flash fiction by Hemingway. “For sale: baby shoes, never worn.”

Wired apparently released an article in which they asked many well-known authors to write a similar piece of “extreme brevity” and many of those authors are sci-fi writers. And going through and reading some that touch on overlapping themes, it is easy to make a connection between the different entries under say: Foul Bachelor Frog.

Despite being occasionally more profane, depending upon the theme, image macro memes are an equivalent form of flash fiction through an electronic medium. If you wanted to see more memes, or perhaps make a contribution of your own, try here: enjoy.

← Cavern of the Evil Wizard
Wheel of Misfortune →

3 comments for “All About Memes”